Happy Thanksgiving to my American friends. I hope it has been full of goodness, gratitude, and all things yummy.

Last year on Thanksgiving, I made a little list of things I wanted to remember about the day. I am so glad for that list, y’all! I have referred to it so many times in preparing for today’s meal (especially to find my turkey recipe). So without further ado, here are some of the things I want to remember for next year (and beyond). 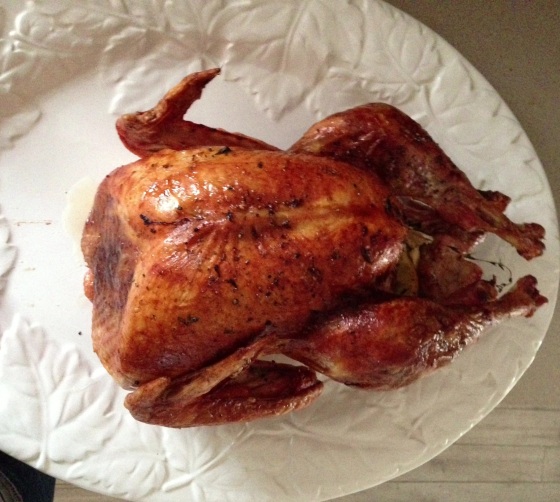 1 – TURKEY. I am so so happy to have started using this recipe last year. It’s Ina Garten’s perfect roast turkey, and I would definitely say that it is perfect. After years of experimenting with wet brining and dry brining, I’ve decided that simple is actually superior. This is so moist and flavorful that I find myself thinking I might want turkey at other times of year (which I say as someone who has never been a big fan of turkey).

2. Another same thing as last year – Gravy I went with what I came up with last year. LOVE it.

– pour drippings from turkey into saucepan

3. Sides – all my usual, some of which are vegan, for the vegan in our bunch:

4. Dessert – I like to break out my trifle bowl whenever possible, and this year I went with a new trifle.

Pumpkin Gingerbread Trifle. I had originally marked a recipe for this from Epicurious, but in the end I went with the Brown Eyed Baker’s version. It was a win, win, win, y’all. I was super-happy with how this turned out, and I will definitely be making it again. You should all make it, too. It is almost entirely from scratch (except one little box of pudding mix) and it is really not hard to make. I would highly recommend this recipe.

My other dessert (I usually have at least three for Thanksgiving – did four last year – but in a rare stroke of sanity, I narrowed it down to two this year) was vegan – a dark chocolate cake with a dark chocolate mocha ganache (vegan).

There are some other things I want to remember, y’all, but I’ll have to write them down later, because I am totally pooped. I hope you have had a great day, wherever you are, and whatever you’ve eaten!