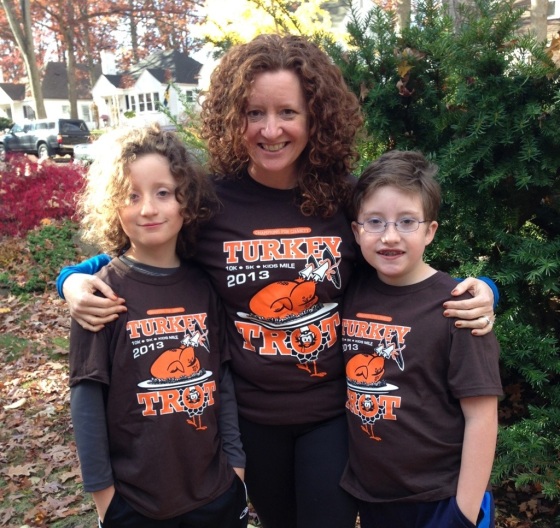 Today I helped my kids run their first 5K. They are not natural athletes, and they are not naturally fast or tough or any of those things that kids who can go out and just keep running for 3 miles seem to be. But they wanted to do it, and I wanted it for them, so we did it.

5Ks are actually my least-favorite distance to run – I like to run far, not fast (though I realize lots of people are able to do both) – and 5K races are over by the time I feel like I am just starting to hit my stride. This particular race – the Ann Arbor Turkey Trot – offers a 10K following the 5K; you can choose to run the Iron Turkey, which involves running both races back-to-back. I did that last year and loved it. In the case of the Iron Turkey, the 5K is more like a warm-up for the 10K; that works perfectly for me.

But this year, I am still coming back from a particularly nagging injury I sustained last spring in a half-marathon (anterior tibialis tendonitis), and I’m nursing some ongoing piriformis problems. I’ve had two running focuses this fall: coming back to running gently enough that I don’t reinjure myself, and helping my kids run. We started running together in late September, when a parent at the boys’ elementary school started a once-a-week running club for the 3rd/4th/5th graders. Every Tuesday, I go train with the boys before school. It’s been a great way to start the day, for them and for me.

We’ve struggled to fit in additional training runs, though, and I knew we were approaching this 5K with less-than-optimum conditioning. In fact, before today, they’d never run a full three miles.That was okay, though, since we weren’t really racing, per se – we were just aiming to finish and to have a good time.

The day didn’t start off great. One of the kids woke up grumpy and out-of-sorts; he got in better space by the time the race started (the steel drum band near the start helped!), but he was still struggling for the whole first half of the race. There were tears before we’d even reached the first mile mark. I struggled with how to motivate without being overbearing. I was frustrated – it’s hard to know how to help a child do his best. Hard to judge sometimes what is his best and not someone else’s best, you know? We ended up walking much more than running, and walking at a slower pace than I’d expected, and I had to let go basically all my expectations about how this race was going to go.

In the end, we barely finished ahead of a woman who took the race at a leisurely stroll while pushing a baby carriage. We crossed the finish line while the 10K runners were already lining up for their race. I came in last for my age group. So did the boys. Of course in their case there were only 13 other runners – so the fact that my two nine year-olds hung in for three miles does feel like a good accomplishment.

So we finished, and it was amazing to watch my boys sprint for the finish line while the 10K runners cheered them on. Seeing the boys’ faces after they’d finished was truly priceless. One of my kids told me with some surprise that he was feeling emotional, because he was so proud of himself.

I am feeling proud of them, too, and hopeful that this is something they will keep wanting to do with me. Given our back-of-the-pack finish today, I’m pretty sure their next race will be a PR for them! 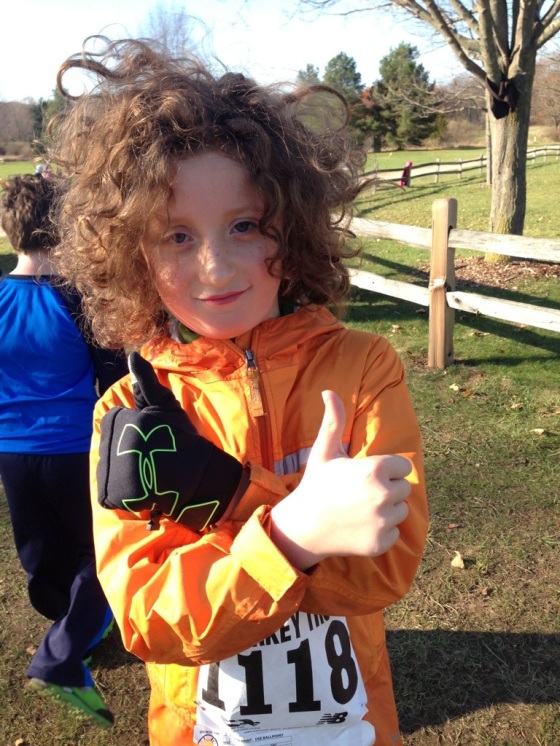