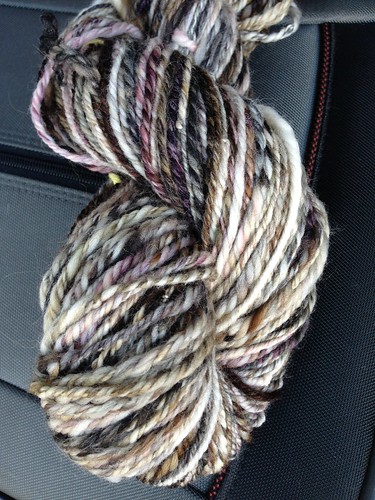 This is my stepson’s adorable girlfriend and she rocks so hard. In addition to many other things I love about her, she also has a true appreciation for things that are handmade (as a massage therapist, she understands the care and energy that go into working with your hands). So when my stepson showed me a picture of a cowl that she had indicated on Facebook that she liked, I knew what to do.

First, I got to work reverse engineering it – I thought perhaps it was a neck warmer from a store, rather than a handknit; the picture on Facebook didn’t indicate. But before long, I found a pattern for it – The Fisherman’s Wife on Ravelry.

This knit is about as fast and easy as they come. I rarely knit with super-bulky yarn, but when I do, I am astonished all over again at how quickly it knits up. If you don’t mind the feeling of knitting with tree trunks, it’s pretty fun. I used Cascade Magnum, which I’d never used before, and I really liked it.

After that, I decided to create some armwarmers to go with it, so, as I’ve already mentioned, I designed these Whitefish Point Armwarmers.

I think she likes them:

I also designed some boot toppers (pattern coming soon), but I only managed to get one of them knit before Christmas (so the gift is coming soon, too). This continues a long tradition of mine, of giving partially-knit gifts. Sad but true.

It was very fun to give gifts so well-received. Her gift to me included a gift certificate for a massage, so as you can imagine, that was mighty well-received, too!