Immediately after finishing a pair of handspun knee-high-ish socks for myself, I cast on for another pair, using my handspun Hello Yarn Superwash BFL in Mochi, the first yarn I finished in 2014: 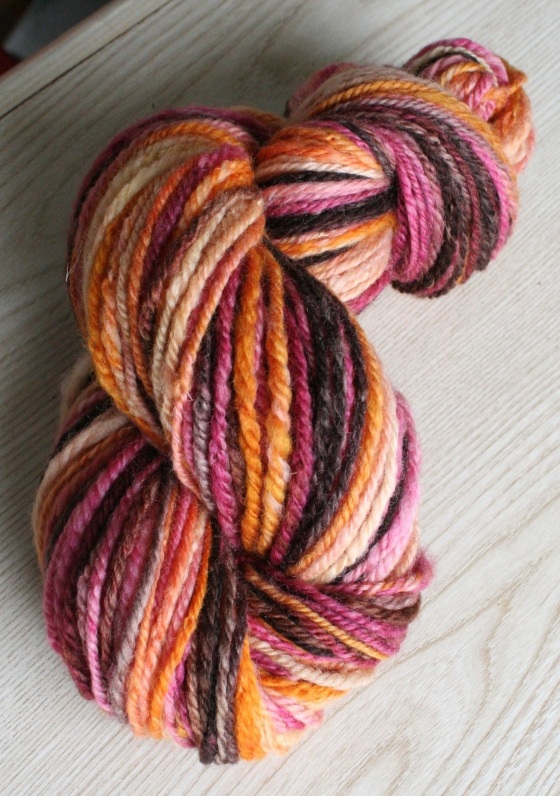 I adore those bright, warm colors, which I spun up as another chain-ply (205 yards light worsted, out of 4 ounces). When I originally spun this up, I was thinking mittens, but lately I’ve been all about the socks, so that’s what I went with.

I decided to do the toe on this pair differently:

Basically, I pretended I was making a wee top-down hat. While I love the figure-eight cast-on I usually use to start a pair of toe-up socks, this cast-on was the simplest, fastest start I’ve ever had. Plus, I love the look of the toes. And the fit is perfect:

Next, I decided to do some arch shaping, to accommodate my high, narrow arch. I’ve done this once before and was very pleased with the results. That was a few years back, but fortunately I made some notes on my Ravelry page that helped me get an idea of what I wanted to do. 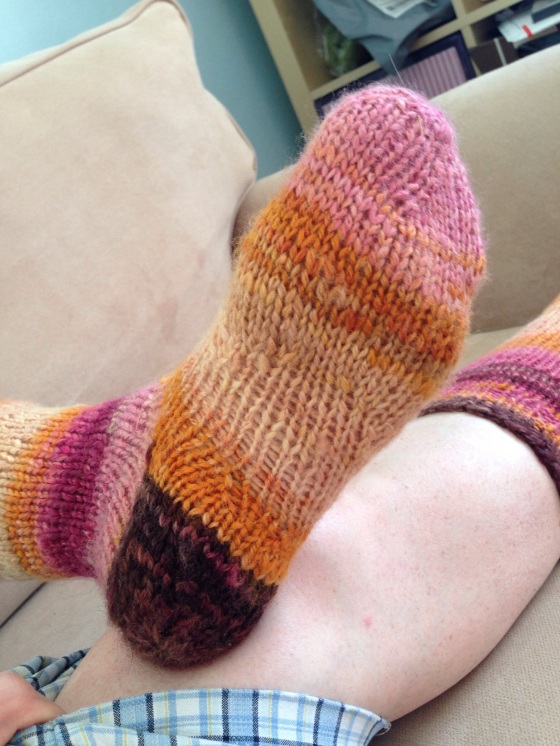 Because I’m in love with an afterthought heel, that’s what I did for these socks. I knitted in a line of waste yarn where I wanted the heel to go, and then I just kept knitting a tube. Good grief that’s such an easy and fast way to make a sock. I put some of the brown parts of the yarn aside for the contrast heel, and then just kept knitting my tube.

When I got to where I thought I would need it, I started some calf shaping. And then before I knew it, I was done with the first sock, and I finished off with some brown for the cuff. I cast on for the second sock immediately, and when I was done with both tubes, I went back and added in the heels with the brown yarn. 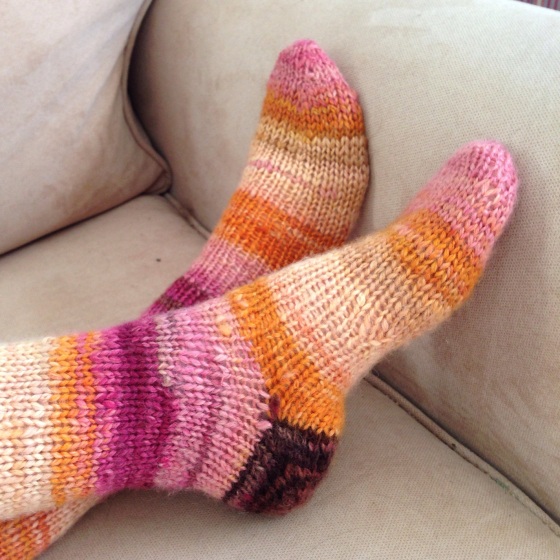 I took this project with me on a winter campout with a Boy Scout troop my son is thinking of joining. I’ve got to say, sitting outside in the snow, watching the sun set, and knitting a sock is an experience I’d never had before. And I liked it!

It was a cold and snowy weekend, and we spent most of the afternoon and evening outside, around a campfire. Knitting a sock with an afterthought heel was basically the perfect project for this, because I was just knitting a simple tube. I continued knitting on into the night, because I didn’t really need to see what I was doing.

The thing is, I had intended to release this as a free pattern. And sitting outside in the cold, in the snow, in the dark, with the scouts, I totally failed to make notes about what I was doing. And now, more than a month later, I don’t know if I can remember exactly what I did. So at some point, I will need to study the sock and/or make another pair. 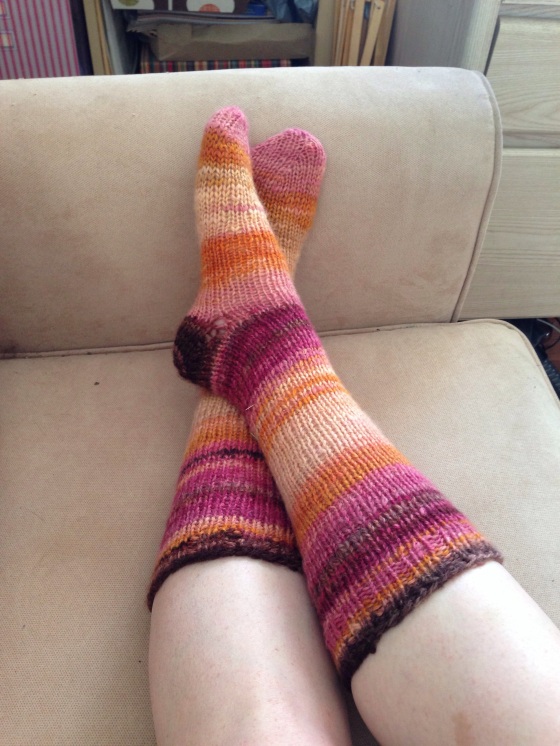 The truth is, I want to tweak the heel just a bit (this is another hat/bullseye heel like in the pair I showed you yesterday). So knitting another pair is probably the way to go anyway.

In the meantime, I have very happy feet (though I do need to back and close up that little gap at the heel on the right sock). (Also, I know more now about how to prevent that from happening in the first place, so I want to incorporate that knowledge in my next pair.) 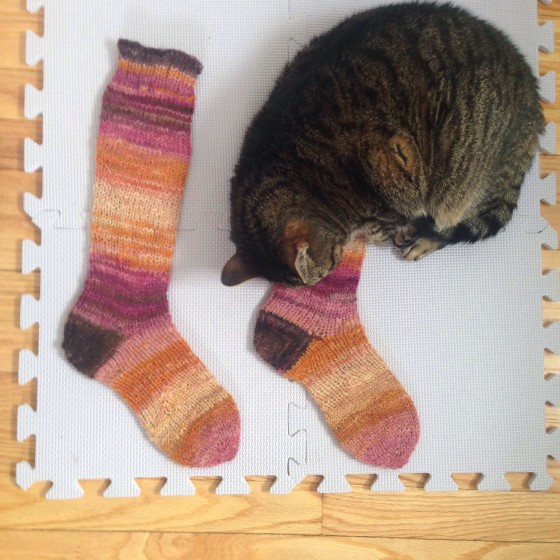 I should add that this pair is cat-approved as well.

As with the pair I showed you yesterday, I managed to magically make a mostly matching set of stripes from one sock to the other: 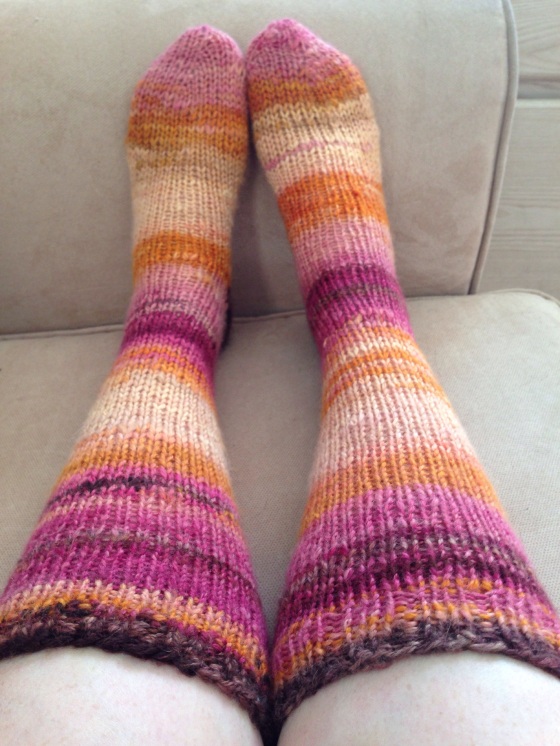 That comes, I think, from how I spun the yarn. I split it as evenly as I could, straight down the middle, and then spun each half from the same end, and then chain-plied. I ended up with one skein of 101 yards and one skein of 104 yards, as close a matching set as I have ever managed to spin.

Maybe no one but me is interested in making handspun, toe-up, hat-toe, arch-shaped, afterthought heel, hat-heel, knee-high-ish socks. But they are fun to knit and a delight to wear, I assure you!

8 thoughts on “More Socks for My Own Self. Or, How I Sat in the Snow in the Dark and Created Something I Love but Failed to Take Any Notes.”