That’s right, just one sock. With the other two sock projects, I was using handspun that I already had in my stash. For Little Buddha, I had to acquire fiber in the colors I knew he would like and then hurry up and convert it into yarn. So, with four days left till Christmas, I spun this up: 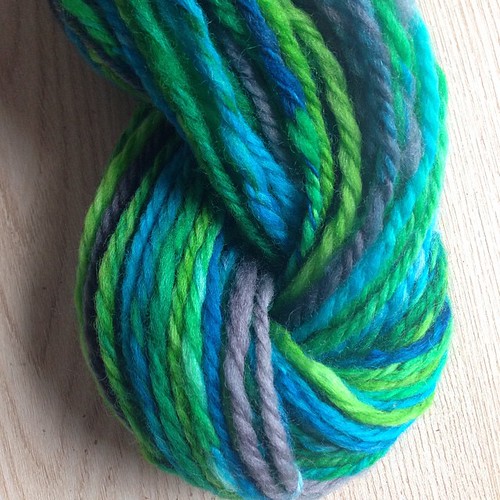 This is “City Park” on Polwarth from a thing for string fiberworks. Polwarth wouldn’t be my first choice for socks, but these are so his colors and I couldn’t resist.

So I spun up the first two ounces and made a single sock.

And I washed it and blocked it and let it dry and then the next day was Christmas. So I gave him the sock.

The funny thing is, we have been calling him “One-Sock Wonder” since he was little, because ever since he was a toddler, he has had a tendency to go around the house in just one sock. At some point we realized it was because his twin brother was always yanking one of his socks off. Eventually, it just became his preference. And now at the age of 10 now, it’s just his thing. So I didn’t feel too bad about giving him just the one.

Actually, I gave him a sock and a half. The first two ounces made more than just the one sock, but I couldn’t quite eke out two whole socks from it.

At any rate, the day after Christmas, I packed up my wheel and hauled it the 800 miles to Georgia, so I could spin up the rest of the fiber on vacation. I accidentally spun it slightly bulkier than the first two ounces, so the cuff of the second sock fits a bit more loosely than the first. But whatever, I finally finished my Christmas knitting.

You can probably guess – but I’ll tell you anyway – I used David’s Toe-Up Sock Cookbook to make these. Once again, a great fit. (Though from the looks of it, he will be outgrowing these very soon!) (Which is fine, because they also fit me!)

It felt really good to have a thick cozy stack of socks to give my menfolk for Christmas.

And it feels even better to see the three of them actually wearing them. There is really no feeling in the world quite like seeing something you’ve made used and loved by someone else.

3 thoughts on “Something for My One-Sock Wonder”