So yesterday I did a bunch of math to figure out whether to rip back and add a few rounds to my shawl, and, if so, how many rounds to add, and I determined that yes, I did have enough yarn for that, and the answer was three rounds, and that was what I would do.

And then I proceeded to do the opposite, which was to move forward by intuition instead of math and keep doing the border I was already doing.

What happened was this. First, John pointed out that adding a second picot crochet cast-off border might be a nice idea. I experimented with how that would look and decided that it looked very nice indeed and that this was exactly what I wanted to do.

And then secondly, Annika and Kelly-Ann both commented on my post yesterday, pointing out that of course the picot crochet bind-off was eating a lot more yarn than a regular bind-off. Which is, in fact, extremely true. And my calculations didn’t take that into consideration at all. I mean, I knew it was taking more and yet I had no idea how much, so I didn’t know how to calculate for that. But I decided it would be unwise to add additional knit rounds without knowing the true amount of yarn this cast-off is consuming.

So I decided to just keep doing the border as I’ve been doing, and to weigh the ball of yarn when I’m done to calculate how many yards I have left. 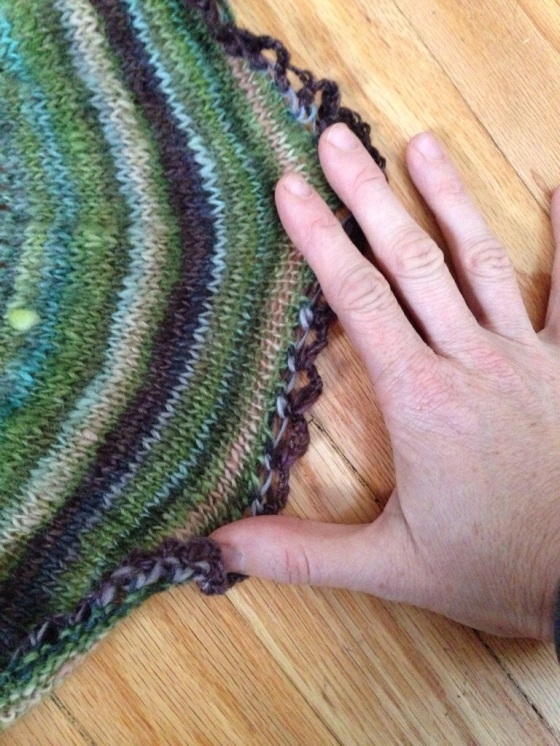 Then I began to get concerned – what if this bind-off is taking up so much yarn that I will run out before I even finish? Ack. So late last night, without a little less than three-quarters of the bind-off done, I weighed the ball of yarn. It was 3 grams. Three grams! That’s not very much! I calculated that at maybe 20 yards.

But then this morning, I did some more binding off. I worked and worked and worked. And then I weighed the ball of yarn – 3 grams! Hmm. I guess with this light yarn (laceweight-ish), it’s not going to register at less than that for awhile. So I’m just going to keep moving and hope I can out-crochet the yarn. And then, when I’m done with this bind-off, if I do have yarn left (and currently my intuition tells me I will), I will go back and add a double set of picots here and there at various places around the shawl. That sounds pretty, right? Don’t tell me if you don’t think it sounds pretty because I’m very excited about it! 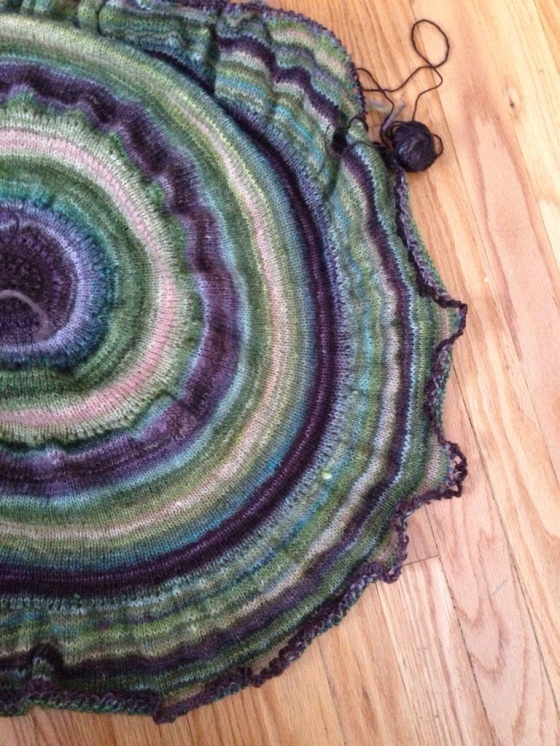 Right now the shawl looks like an indistinct blog with a curling border. I can’t wait to see it transformed by blocking. SOON!

3 thoughts on “Or, Perhaps the Opposite Will Happen”