I know that most sports fans right now have their minds on basketball, but not me. It’s officially spring now (WOOHOO!) and I can’t help it – I am leaning towards baseball season, hard. Please tell me I have some fellow baseball fans out there, yes?

I grew up as an Atlanta Braves fan, like my mama and my grandmother, and it took me more than a decade of living in Michigan to finally open my heart to the Tigers – I had a hard time making the switch from National League to American League love (thanks to that pesky designated hitter rule). But once I did, I became a fully committed fan. Now, I am ALL IN. 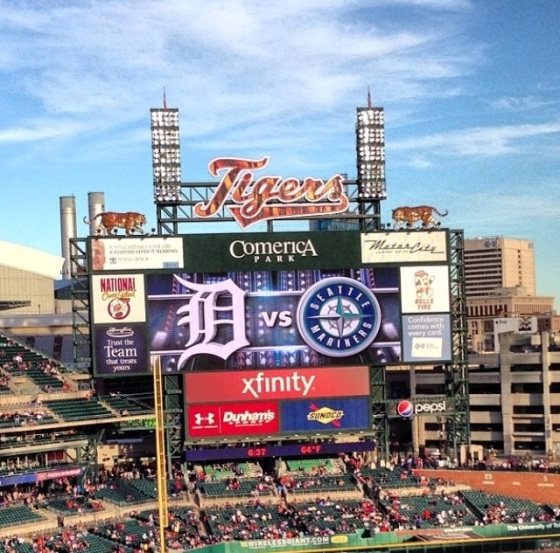 All my fellas are all in, too. It’s been great fun for My Old Man (a lifelong Cardinals fan) and me to introduce our kids to the love of baseball.

What does any of this have to do with knitting? A lot, actually, but I will have to save most of my musings for another day. For now, I just want to talk a little about a conceptual knitting project I have in mind, and to see if anyone else might want to join me.

Are you familiar with conceptual knitting? The first conceptual knitting project I’m aware of was the Sky Scarf, by Lea Redmond. The idea is to knit a scarf that matched the sky – a different garter stripe each day based on the weather: rainy, cloudy, sunny. It’s a very cool concept, and it makes each project unique to the knitter, based on when and where s/he knits the scarf. A similar concept really took off last year, with the My Year in Temperatures scarf, each stripe representing the actual temperature of the day. I’m captivated by the idea of conceptual knitting not only because of the uniqueness of the finished project, but also because it’s a long-term idea executed in very small increments – if you keep up with it, you only need to knit a little each day, and at the end you have a kind of living document of that year or season.

I was thinking about conceptual knitting last fall, as I was eagerly cheering my team on in the postseason as well as wishing for a Tigers-colored handknit to keep me warm in October. The idea for Crackerjack took hold of me and wouldn’t let go. Now that this year’s regular season is about to begin, I am ready to make it happen.

The plan is to create an infinity cowl that I start on the first day of the regular season and finish on the last day of the regular season, with the hope of getting to wear it during the postseason while cheering my team on to the World Series (a girl can dream!). Here’s how it’s going to work. Detroit Tigers colors are navy blue, white, and orange. Since they wear grey uniforms for away games (as all teams do), I’m going to throw grey into the mix as well. So I’m going to work this project in those four colors – blue, white, orange, and grey – and I’m going to assign each color to a home win, a home loss, a win away, and a loss away. I’m going with white for home and grey for away since those correspond with the uniforms for those games. So here’s what I came up with:

Please to be ignoring my terrible writing.

And here’s how a portion of it would have looked if I had done at the beginning of last season: 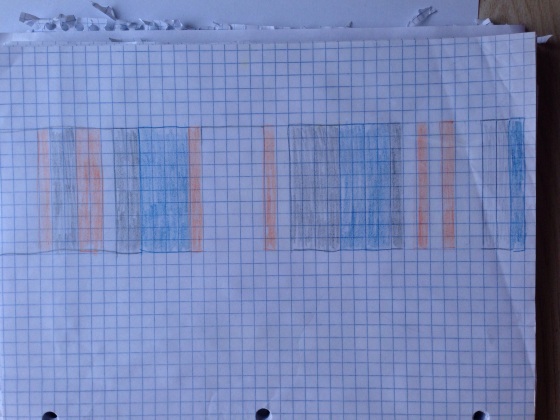 I think it’s going to be super-fun to see how the colors stripe and block, based on how the season goes. I hope there will be a LOT of blue and grey!

And here are my yarns:

The blue I’m going with is actually not a navy – I bought some navy last fall and it was so dark it looked black. Paired with the orange, it looked like I was getting ready for Halloween. I don’t want actual tiger stripes in this project, just Tigers stripes. But the blue I’ve got is not quite as royal as it looks in this picture (nor is the orange as neon as it might seem here). Stonehedge Fiber Mills is one of my favorite yarns, and it’s Michigan-made, which is a bonus.

I’m wondering if anyone else out there might want to try this with me? I would suggest going with white for a home game (either win or loss) and grey for away (either win or loss). If your team only has one additional color (like the New York Yankees, for instance, whose colors are navy blue, white, and grey), then I would suggest picking whichever color you like the best and assign that one to all wins, whether at home or on the road. So taking the Yanks as an example, you might do blue for wins both at home and on the road, white for home losses, and grey for road losses. Assuming a lot of wins, you would have a scarf with a lot of blue, interspersed with lines and blocks of white and grey.

Personally, I think this will be a fun way to chart the 2014 season for myself, not to mention that, by late September I will have a Detroit Tigers infinity cowl to wear while I watch the postseason.

I’ve created a pattern page on Ravelry.  It has the most rudimentary instructions there (essentially what I’ve already said here), but I will be updating it in time for Opening Day, with an actual (free) download – it will be more of a recipe than a full-on pattern, so that you can use whatever yarn you’d like at whatever gauge that works for you. I just thought I’d go ahead and post all of this now, in case anyone would like to join me – so that you have a little time to gather your yarn.

See you on Opening Day! RAWR!

35 thoughts on “Crackerjack :: A Conceptual Knitting Project (any baseball fans want to join me?)”