update: the yarn is now spoken for 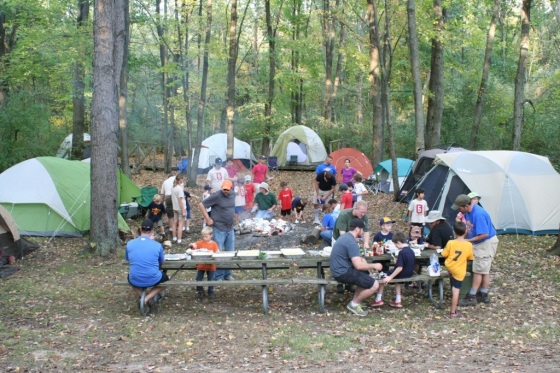 So my kiddos and I did a new thing this past weekend and went on a campout. Camping was a thing I did a lot in my earlier years – a little in my childhood and teens, a lot in my college days and my twenties. But I’ve done very little of it since then, which is sad to realize. Every year, I think I will take my family camping, and for various reasons it just doesn’t happen. One thing I realized this year is that part of the problem is that, of the four of us, I’m the one that knows the most about what to do, and I don’t feel like I know all that much – in my younger days I always went camping or backpacking with people who knew more than me. So I was never the leader in the enterprise.

At any rate, my guys decided this year that they wanted to be Cub Scouts, and the very first outing was a campout, and it was good. We got to go camping and I didn’t have to be the leader.

It was a really beautiful weekend for camping. I’ve usually associated camping with being in the mountains (the Carolinas, north Georgia) or at the beach (Cumberland Island), but here in Michigan, it means being in the woods and near a lake.

My kids were hugely unimpressed with the size of this lake – they now expect any lake to be a Great Lake – but I thought it was positively perfect. But there is a special kind of terror that comes with standing on a dock with 17 young boys who all have hooks on the ends of strings and are casting them into the lake. Pro tip: wear sunglasses, even if the sun is setting.

For the first time in my life, I baited hooks. Believe it or not, up until now, I left that job to either my dad or my spouse. Turns out tearing an earthworm in half and impaling him on a hook is about as gross as I thought it would be, but I managed.

We had a really great time. 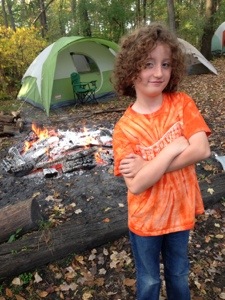 That’s not our tent. In fact we don’t have a tent, yet. And that’s where the yarn comes in (surely you’ve been wondering how a post about camping was going to make its way to a destash) (and no, I didn’t knit a tent).

We were slated to sleep in the cabin, which we had envisioned as being a fun time with other cabin-sleeping families. Only there was only one other family in there, and when they smelled the mold in the cabin (it was pretty bad), they elected to sleep in their car, due to asthma issues. We didn’t really want to stay in the smelly cabin (with mice in the ceiling!) alone, so my guys begged to sleep in the car, too. My Honda Odyssey is plenty spacious for sleeping, at least for kids, so I collapsed the back row and they had a great little place to put their bags and stretch out. (Me, not so much. Sleeping in the front passenger seat, even all the way leaned back, is about as comfortable as you think).

But the issue with having such a large vehicle is that I often use it for storage. And getting the car converted into a sort of camper meant moving a LOT of stuff around. Probably 30 books I’d been carrying in my trunk, and many, many other items. And then I opened the front console, and look what I found! 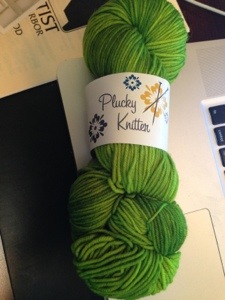 WHAT. A skein of Plucky Sweater in “Chlorophyll,” which I’d been looking for since August. I took it with me on our trip to the Upper Peninsula two months ago and didn’t realize I’d left this one skein in the car. I have looked everywhere in this house for it, and had begun thinking that I must’ve actually used it in knitting my Cape Cod sweater.

But now my mystery is solved. I only used four skeins of Plucky Sweater for the pullover – and I used exactly four skeins, with nothing left over – which means the sweater took a mere 1080 yards. Nice!

Good grief, I love this color so much.

But I really don’t need a whole other skein of it. How about you? I can offer it on The Plucky Knitter Ravelry forum, but I thought I’d offer it to my readers first. I’m asking $25 via PayPal, which will include shipping (only in the U.S., sorry!). If you’re interested, leave me a comment in the comments section and I will follow up, stat. If you’ve never tried TPK, now’s your chance. I can’t recommend it highly enough – Sarah does an amazing job, and this color is particularly luscious (and perfect for a little Halloween accessory, yes?).

update: That was super-fast! It’s spoken for!

3 thoughts on “for destash :: a favorite yarn in a slammin’ color (The Plucky Knitter Plucky Sweater in “Chlorophyll”)”