How can something so simple be so deeply satisfying?

I knit these up with my own handspun – Funky Carolina Superwash Corriedale in “Autumn’s Fire.” The pair only took about half of the yarn I’ve got, so maybe I’ll make another pair for a gift. The colors are so perfect for me, and so perfect for fall.

Carrie has such wonderful color sense. I loved the flashes of red in this, mixed with the golds, browns, and light greens.

I spun this in early July, after I’d only been spinning for a few weeks. It’s underplied, and in a few places it’s overspun. But mostly I love it. It’s 176 yards of heavy worsted Superwash Corriedale. The mitts took about half (or less) of the yarn.

pattern: Toast by Leslie Friend
needles: size 7 dpns
cast on: September 29
finished: September 30
mods: Because I was knitting with heavier yarn than the pattern called for, my gauge was off. To compensate, I reduced the cast on number from 34 to 28. They fit perfectly! 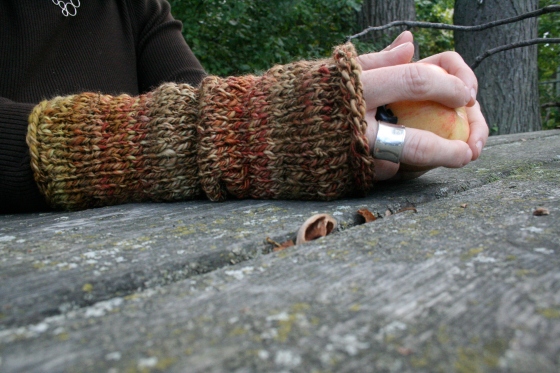 I’ve made mitts before, but never thumbless ones, and I love these most of all. The way they function as a sort of extended part of my sleeve is just perfect. The fact that they’re made from my own handspun makes me even happier. I know I’m late to this bandwagon, so pardon me for gushing about what everyone else already knew.

I see more of these in my future.