In October, our beautiful niece gave birth to her first child, our first great-nephew. In June, My Old Man and I had the honor and thrill of officiating at his Christian dedication. I decided I wanted to make something that might be considered to be heirloom quality for the event, and after a lot of deliberation, I settled on the Hap Blanket.

pattern: Hap Blanket from Whimsical Little Knits by Ysolda Teague
raveled
yarn: Socks that Rock, Heavyweight – 2 skeins Stonewash, 1 skein In the Navy
needles: size 8
dates: June 16-July 19
mods: I didn’t do the stripes in the center. I really much prefer the simplicity of the solid center, with the stripes only along the border. Also, because I was using a different weight yarn thant the pattern calls for, I cast on more stitches, knit for longer, and picked up more stitches for the border. I did all this somewhat intuitively, just knitting until I had a square that looked to be the size I wanted.
notes: I pulled one of my favorite tricks with this knit – running out of yarn at a particularly inopportune moment. I was trying to use up the STR leftover from my February Lady Pullover, which was something less than a skein. We were actually en route to the dedication in Missouri when I ran out of the dark blue.

I dithered over what to do about it, and considered finishing off the border without a third dark blue stripe. But I really love the way those border stripes look, and I especially love the look of finishing the border in the contrast color. So I finally decided to wait and give the blanket late – it was more important to me that the blanket be just right than that it be right on time, especially since the chances of him actually needing or using it in midsummer are slim! Luckily, we were scheduled to see our niece again a few weeks later. So I ordered more of the dark blue (and Blue Moon Fiber Arts was super-quick in getting it to me!) and I finished the blanket off. 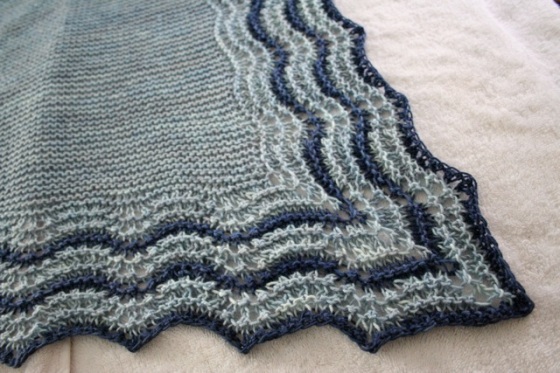 I did run into one more problem before all was said and done though. I went with the bind-off as per pattern, as opposed to my usual lace bind-off. And I didn’t realize until I was blocking that the bind-off was far too tight. I couldn’t get the nice scallops going. So, I waited for it to dry, then undid the entire binding (ugh!), and then redid it using my usual Russian bind-off: p 2, slip back to left needle, p2tog, p1, slip both sts to left needle, p2tog, p1, slip both to left needle, etc. It worked beautifully.

A note about the yarn: YUM. I do love me some Socks that Rock, heavyweight. The semi-solids have such depth of color, and the yarn just feels good to work with – so sproingy! so squishy! But y’all, it is expensive. I know not everyone would want to do a baby blanket in this yarn because it takes at least three skeins. But I happened to have this yarn on-hand and I thought this was a perfect way to use it. I also figured I was being pseudo-economical using up stash yarn. Until I had to order another skein. Whoopsie! But if you can stomach the price and/or if you are knitting an heirloom piece, I would highly recommend the yarn. In addition to being sproingy! and squishy! is it also sturdy and washable. Honestly, I would be hard-pressed to come up with a better machine-washable yarn for this pattern, and I’m really glad I used it.

Look at those colors!

A note about the pattern: there was an error in the version I downloaded. Row 5 (and every row that repeats it) should be a purl row, not a knit row. A lot of people on Ravelry say that if you follow the chart instead of the written instructions you’ll be fine. But my chart also indicated a knit row. If you go by the chart and change row 5 to purl, just make sure that you do the same for every row in the chart that is supposed to be a repeat of row 5.

edited to add: I just realized that the above paragraph is completely wrong. I was knitting another of Ysolda’s patterns simultaneously with the blanket – the Liesl cardigan, which is also feather-and-fan – and it was that pattern that has the errata, not the Hap Blanket. So please disregard!

I have to say, baby blankets are not one of my favorite things to make. I think I have only ever made three of them (this being the third). I would just usually rather knit a baby sweater and then maybe sew a quilt or blanket. But I wanted to do something extra-special for this extra-special babe, something I could spend a lot of time with. And as far as baby blankets go, this pattern is a definite winner. It went fast (or would’ve – if I hadn’t run into my yarn-running-out and too-tight-binding problems). Just when you get tired of knitting in garter stitch, you get to do the feather-and-fan border. And just when you get tired of that, you’re done! I think the results are quite nice. And I hope my great-nephew will enjoy it for a long time. 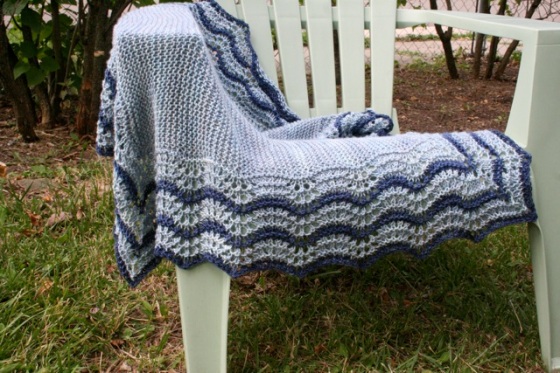 17 thoughts on “knitted: for a baby (Hap Blanket)”