It was two years ago that I became completely smitten with the Bea Ellis hat kits, after seeing Bea Ellis hats show up on Ashley’s, Lolly’s, and Kathy’s blogs. I had returned an early Christmas gift that didn’t suit me, and I turned around and spent the money ordering a hat kit. Only I was nervous about the colorwork, so it sat in a yarn bin under my bed for two years.

After tackling the (minimal) colorwork in the Almost-Famous Luggy Bonnets for my boys, I realized I was being ridiculous. So after all this time, I finally pulled out the kit and got to work. It was so easy and so quick, I could hardly believe it. 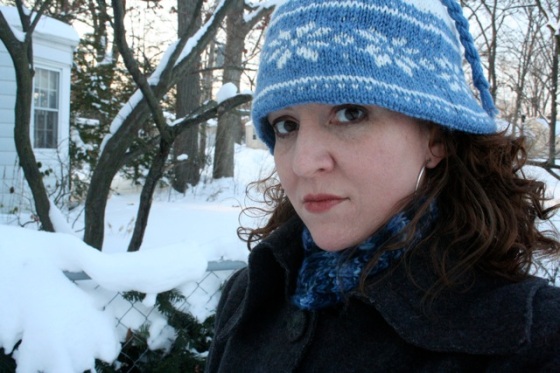 pattern:Traditional Hat (rav link) by Bea Ellis
yarn: Dale of Norway/Dalegarn Heilo, roughly 218 yards, in medium blue and cream, plus cotton for lining
needles: size 3 for lining, size 5 for hat
cast-on: December 20
bind-off: December 27
modifications: none; did make the optional tassel for the top
verdict:This is a great pattern and a cute (and warm) hat.

My colorwork still leaves something to be desired. Even after a good blocking, the smaller bits of white in the blue band didn’t come out quite visible enough. I am knitting with the dominant color in my left hand and the contrast color in my right, which makes my tension a bit wonky. I prefer knitting with both colors in my left but then the yarn gets tangled in no time. I am going to continue working on the colorwork in 2009 and hope to make some improvement.

I did the lining per the instructions but the hat came out a bit flared. If I had it to do over again, I would knit 10% fewer stitches for the lining than for the hat; I think this would cure the flare problem.

Still, it’s a delightful knit and a cute end-product, so I’m going to enjoy it this winter.

That’s it for 2008! Next up, a retrospective of 2008 knitting, sewing, and other shenanigans, and then I can finally show you the first finished object of 2009 – one of my favorite knits so far!