In November, I was invited to a shower that was to happen the same weekend we were gone for our nephew’s wedding. The baby is due in January, so originally I had planned to knit something in time for the birth. But why not give myself the pressure of an earlier deadline, even though I wouldn’t be in town for the event? The grandmother-to-be is a good friend of ours who gave us the most gorgeous handmade (by her sister) quilts for our own baby shower, so I really wanted to have a handmade gift from us at her daughter’s shower. So I ended up adding a bit of crazy to my life in mid-November (when I was already almost over the edge due to bind-off issues with my Moonshadow Stole for the wedding, but I digress).

In the end, I finished the knitting itself in record time, the day before we left for the wedding. But with so much else on my plate by that point, I knew it would be foolish to spend time sewing the seams and adding the button. So after all that manic knitting, I ended up with a BSJ that is still sitting on my shelf, waiting to be gifted.

pattern:Baby Surprise Jacket by Elizabeth Zimmermann, Knitting Workshop
yarn:Lorna’s Laces Shepherd Sport, in Tickled Pink, 1.5 skeins (300 yards)
needles:size 3
cast on:November 13
bound off: November 19
notes:After my second BSJ, I realized that the collar really looked unfinished. For that one, I added a little collar, which I ended up liking a lot. For this one, I decided to go with a crochet edge (after having so much success with my crochet edges on my bevy of hats last month).

I think the crochet edge nicely mimics the bind-off along the button band. I use a purled Russian bind-off, and I so love the looks of it.

After last time’s fragile attempts with a snap closure, I took noirbettie’s advice and got a snap press. With a coupon, you can get one for less than $20 at Joann’s. I was pleased with the results…

… except that once the snap was closed, I couldn’t get it open! I finally pried it open with a tapestry needle (with much effort) for this picture. But I’m really concerned that the mom won’t be able to open this easily and might damage it in trying. The whole reason to use snaps was for easy opening and closing! I’m not sure what to do about it at this point. (Ideas?)

I love the BSJ, for all the reasons that so many other people do. But after knitting three of these in one year, I think I’m done for a good little while. 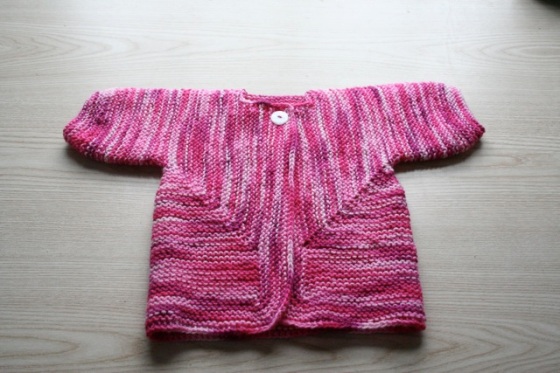