A hat trick in sports is associated with succeeding at anything three times in three consecutive attempts — Wikipedia.

Well then, all the more so if those three consecutive attempts are actual hats, yes? This Thorpe was actually the first of the three-in-a-row hats I knitted, but I had to wait to blog it till I had gifted it. 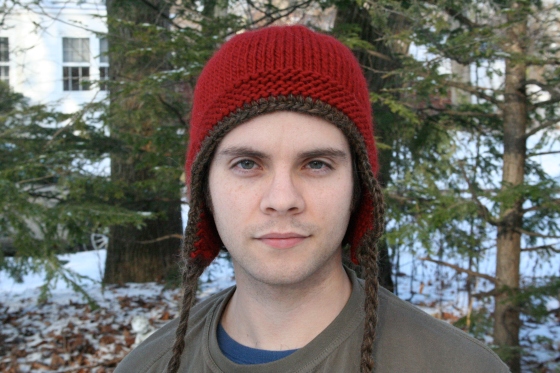 pattern:Thorpe (rav link) by Kristen Kapur
yarn:Lamb’s Pride Bulky, Spice, a little less than one skein (left over from my Fabulous Lace Inset Cardigan from a long time ago) and Lamb’s Pride Bulky, Sable, for the crochet trim and braided tassels
needles:size 9
size:medium
for:Chris, My Old Man’s son, who was visiting us from England
cast on:November 20
finished: not quite certain – it took me over a week because I was knitting Luggy Bonnets during that time, as well as fiddling with fixing my Moonshadow Stole for the wedding, as well as having to redo this hat when I ran out of yarn
modifications: None needed, except that since I had less than a skein of the Spice to work with, I ran out of yarn right before finishing the second ear flap. So I had to rip back and take out a row or two of the body of the hat, and then I made the ear flaps a tad smaller than the pattern called for.
verdict: This is an awesome pattern and I will be making it again. A fast, fun knit with beautiful results. Also, doing crochet trims on three hats in a row kind of made me love crochet a little bit.

Chris goes camping a lot and keeping his ears warm is a requirement for any hat I make. I love the shape of these, and the fact that they are in garter stitch.

I’ve been wanting to make this hat for awhile, and I’m glad I finally did. I think Chris likes it too.

I had wanted to get a picture of all three guys in their new hats, but I knew Tiny Dancer would never cooperate with that, given how much he hates his. I did get a couple of good-bye shots at the airport though.

Good-bye, Chris. We miss you already!