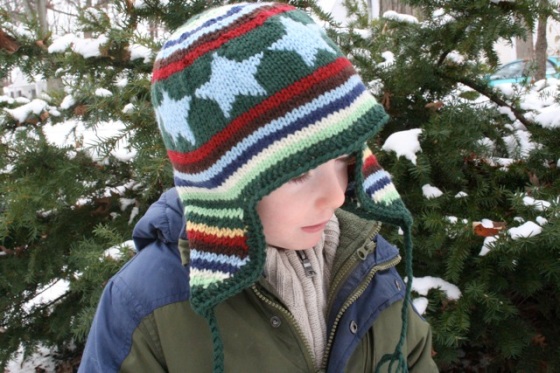 I didn’t have any intention of knitting the first one of these, and I certainly hadn’t intended to make two. I had a whole different hat planned for Tiny Dancer, but once he saw Little Buddha’s Almost-Famous Luggy Bonnet (anyone else kind of hate that name?), he had to have one just like it.

Little did I know how seriously he meant just like it . I thought using the same colors would be sufficient. I decided to change up the order a bit, to tell the two hats apart, and to keep things interesting. So Tiny Dancer’s star panel has a dark green background.

And that, apparently, is the deal breaker. It was supposed to be dark blue, just like his brother’s. So what I have made, it seems, is a hat for our Cooperative Nursery’s Silent Auction in February. Who knew I would be so ahead of the game? 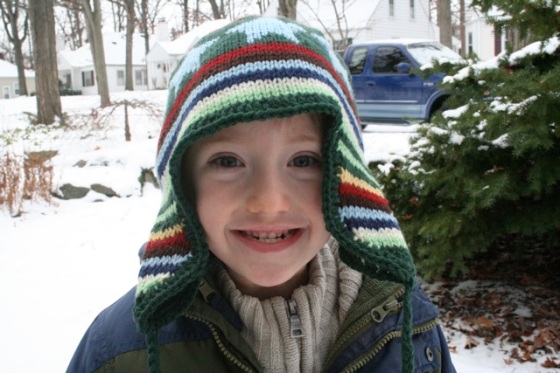 pattern: Almost-Famous Luggy Bonnet from Weekend Knitting
yarn:bits of Wool of the Andes, Swish Superwash, and Lorna’s Superwash Worsted
needles: size 7
size:followed the directions for 6-18 month size, knowing that my gauge was drastically different (since I was knitting with worsted and the pattern gauge is for DK)
cast on: December 1
finished: December 5
modifications: Knit in the round. Added braided tassels. Left off the reverse single crochet (crab stitch) edging (i.e., just did the double crochet). Changed top shaping because I didn’t want the long pointy top. So I followed the decrease directions from the Kim’s Hats pattern in Last-Minute Knitted Gifts. I liked the outcome of these decreases much better than what I came up with Little Buddha’s hat.
notes: Even following the directions for the smallest size, the hat ended up way too big for Tiny Dancer, who’s head is smaller than Little Guddha’s ginormous noggin. For the next incarnation, I will recalculate what I need to cast on based on his exact measurements and my gauge. As it is, this hat actually fits me – and I have a notoriously huge head (when Little Buddha was 4 months old, his head measurements jumped off the chart and the doc was concerned. After a CT scan came back normal, I told the doctor I came from a family of big-headed people. He measured my head and said, “Wow, you do have a large head.” He then wrote in Little Buddha’s record: maternal history, big head. Nice.) So you can get an idea of how large this “luggy bonnet” is: 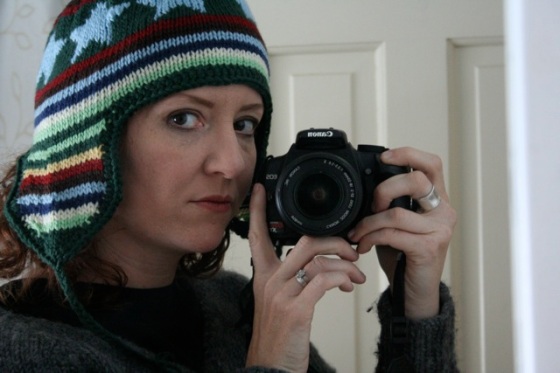 verdict: He hates it. 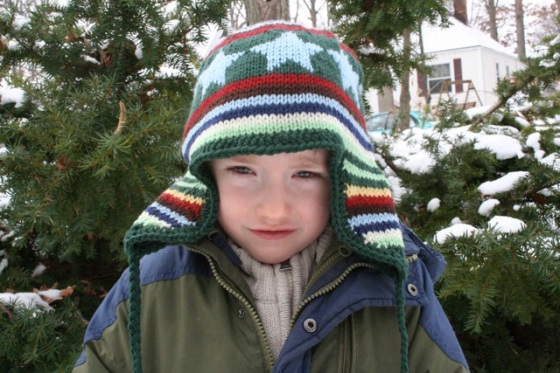 No. I mean he really hates it. 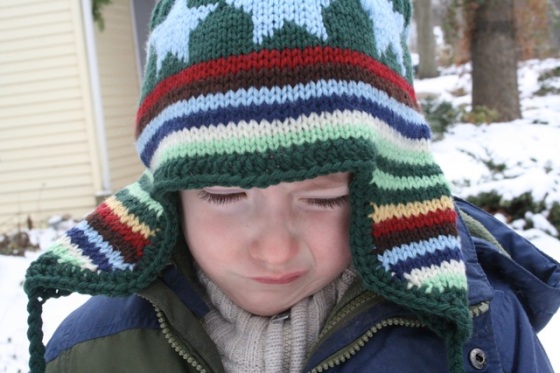 So yeah. Looks like there’s going to be another one of these in my near future. With the star background in dark blue. And oh yeah, this one is going to fit.