I think of myself as a selfish knitter (honestly, I think of myself as a selfish person. Do I redeem myself at all by at least admitting it straight-up?). Knitting is for me mostly a selfish pursuit. I love the results of knitting, but mostly I enjoy doing it, and that’s why I do it. Because I want to. And I mostly want to make things that I like. And I am realistic about the fact that no one will ever appreciate my knitting the way I do (with the possible exception of another knitter – but then I get myself all messed up worrying about how good it is). But every now and then I manage to crank out a little gifty for someone.

Enough with the chitter-chatter. I just wrote all of that to avoid having a post that only said something like, “Hey, look at this random assortment of things I made for other people in April and May and June!”

First, there was more baby knitting. You know what baby knitting does to me. And it was even worse in this case – because it was twins. Twin girls! And y’all, they are truly and objectively two of the most beautiful babies ever born. No pictures here, because they aren’t mine to share, but just imagine two perfect little baby girls, each with a shock of black hair and brilliant blue eyes.

I made them a pair of hats and then took some crappy pictures.

pattern: Children’s Cotton Hats from Last-Minute Knitted Gifts
yarn: Bernat Cottontots Ombres, a white/pink/lavender variegated; one skein made two hats with some left over
needle: size 7
cast-on/cast-off:started the pair April 21, finished the pair April 23
mods: none
verdict: A quick, easy knit. I don’t know why I don’t just make these randomly here and there to have on hand for baby gifts. They’re perfect for someone you don’t know well but would like to give a little something to. It was also a fun pattern for me to revisit, because this was the first hat I ever made, way back when – three years ago, actually. For my own sons, when they were 15 months old.

Then I finally got an old unfinished object off the needles. Purple socks for my knitting friend Cathy. I wrote about her last year, when she was having brain surgery. I had wanted to finish socks for her then, but the pattern and I did not gel. I wanted them to be perfect, especially since she is also a knitter. I finally started on a new pattern last September, finished the first sock in time for her 50th birthday in November, and then finally, finally finished the pair in May. This was a project I just picked up here and there – and invariably screwed up because in such a dark yarn it was hard to tell where I was in the cabled pattern. 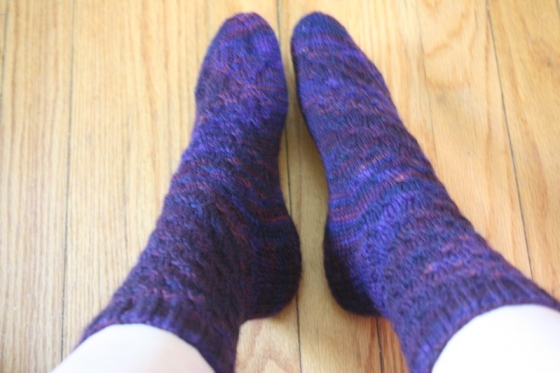 They are also frightfully hard to photograph well. 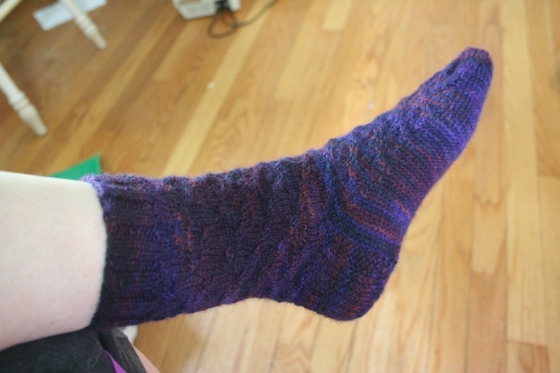 pattern: Uptown Boot Socks from Favorite Socks
yarn: Mountain Colors Bearfoot, in Twilight
needles: size 0
cast on: September 2007
finished: May 2008
mods: unintentional toe-shortening, intentional addition of a garter trim along the gusset
verdict: this was a great little pattern but the wrong yarn for it, the cables are somewhat lost on this dark yarn; the yarn itself, however, is a dream to wear – so warm and soft. Also, Cathy likes them! Even though I took almost as long to mail them as I did to knit them.

Late last winter, I was at a meeting with two other moms in our Co-Op preschool, when we all three discovered that we knitted. Okay, we each already knew that we ourselves knitted, but you know what I mean. Anyway, Jamie decided we needed to start ourselves a little knitting group. And she did it. Six of us gathered sporadically throughout the year for knitting, crocheting, and chatting. Such fun! And so sad when Jamie then had to move away in June. We had a little get-together in her honor, and we each knitted a dishcloth. Here was my contribution. 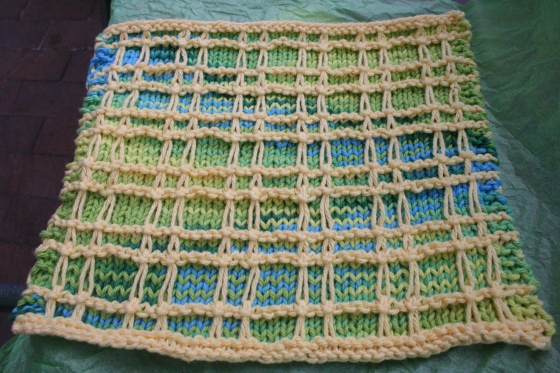 pattern: Playful Plaid Dishcloth by solmama
yarn: Lily Sugar ‘n Cream Ombres plus Lily Sugar ‘n Cream Solid Yellow
needle: size 6
dates: May 31-June 2
mods: none
verdict: I loved it! Fun little, fast little knit. I especially like the versions on Rav where there is more contrast between the solid yarn and the variegated.

Here’s the pile of dishcloths we gave Jamie. 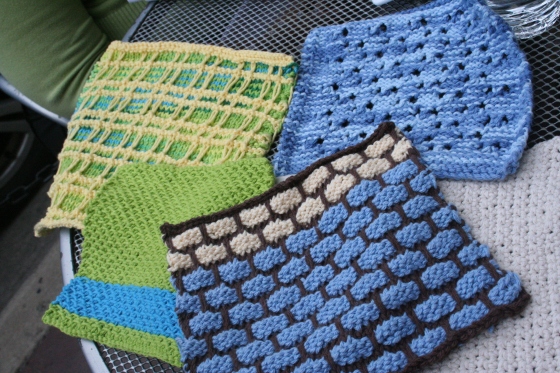 Also, I’ve been participating in the 365 Self-Portrait Project on Flickr, and the night of Jamie’s going-away shindig I took my third self-portrait of the series. Out of the 93 self-portraits I’ve taken so far, this is still one of my very favorites. 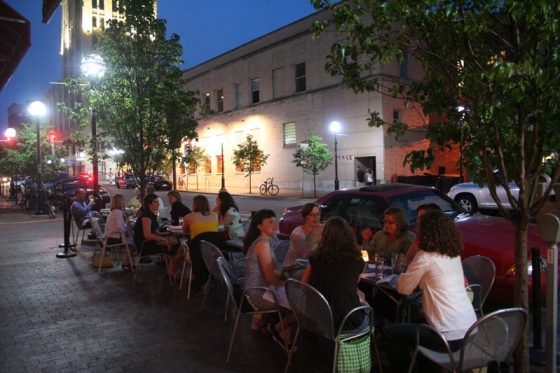 (that’s me on the far right, white top)
I love Ann Arbor. And knitting friends. 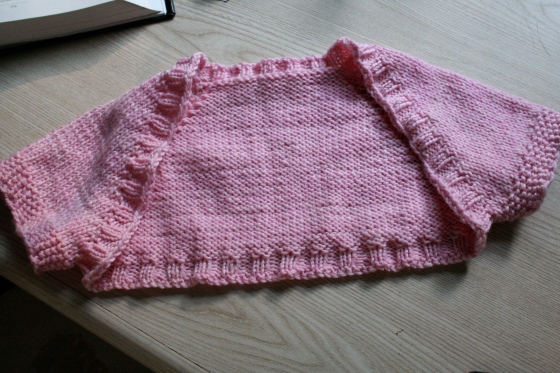 This was a going-away gift for our babysitter, who has been with us for 2 years (half the boys’ life!).

So there ya go. When you start seeing a succession of things I have knit for me! me! me!, just remember – in April, May and June of 2008, I knit a few little things for other people. So there!